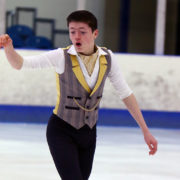 The two-time Irish Junior national champion will skate his short programme on the evening of Thursday, 12 October and his free skating routine on the afternoon of Saturday, 14 October. He will be one of 28 competitors from 22 countries at the event in Italy.

This is McAllister’s second season competing on the ISU Junior Grand Prix circuit. At his previous Junior Grand Prix event in Latvia, he achieved the full set of minimum qualifying scores necessary to participate in the World Junior Figure Skating Championships in Sofia, Bulgaria next March. 2010 was the last time an Irish skater qualified for the championships.

The ISU Junior Grand Prix of Figure Skating Series started in 1997 and has become one of the most prestigious events to which young figure skaters can be invited. There are seven Grand Prixs annually and each skater will normally compete at two of these to accumulate points in order to qualify for the Grand Prix Final in December. This week’s competition in Italy is the final one in the series.

The Junior Grand Prix in Italy will be broadcast entirely live online on the ISU’s YouTube channel from Thursday, 12 October.