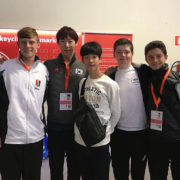 Sam McAllister was in action this weekend in Egna-Neumarkt, Italy where he skated in his second International Skating Union (ISU) Junior Grand Prix of Figure Skating assignment.

McAllister began with his short programme to “Nothing The Same” by Gary Moore where he attempted triple Lutz and double Axel jumps and executed one Level 4 and two Level 3 spins. He received a score of 38.60 points to put himself in 24th place midway through the event.

The two-time Irish national junior champion next proceeded to the free skating segment where he performed to music from the “Sherlock Holmes” film soundtrack. He landed two triple Lutzes and a triple Salchow during the course of his routine amongst other elements and once again had his flying sit spin graded Level 4. He earned a score of 75.55 points to give him a total competition score of 114.15 and he remained in 24th place overall.

It has been a successful start to the season for McAllister has he has now achieved the qualifying score necessary to participate at the World Junior Figure Skating Championships in Sofia, Bulgaria.

“I am very satisfied with how well my first competitions of the seasons have gone,” McAllister said. “I am looking forward to getting back home and building on what I have learned.”

ISAI Board and Speed Committee Nominees
Scroll to top