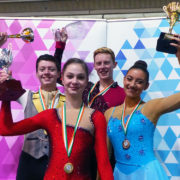 The Irish Figure Skating Championships were held over the course of two days at the Lee Valley Ice Arena in London with champions decided in seven categories.

Conor Stakelum began his journey to a fourth Senior Men’s national title with a final outing of his “East of Eden” short programme. He landed a triple toe loop-triple toe loop combination, a triple Salchow and a double Axel to earn a best ever score in competition of 52.02 points.

In the free skating, he executed triple Salchow-double toe and triple toe-double toe combinations, as well as a triple toe and two double Axels. He closed out his “Chasing Cars” routine with a Level 4 change foot combination spin and received a free score 87.71 for an overall total of 139.73.

Sam McAllister took home the Junior Men’s title for the second year in a row. In the short, he attempted a triple Lutz combination and performed one Level 4 and two Level 3 spins to “The Mask” soundtrack. He received 43.73 points.

His free routine to the “Sherlock Holmes” soundtrack included attempts at a triple Lutz, two triple Salchows and two double Axels. The technical panel also graded his flying change foot sit spin Level 4. He netted 75.12 points for his free which left him with a total of 118.85.

Ciara Hoey added a fourth Junior Ladies national title at the championships. In her short, she attempted a double flip-double toe, a double Axel and a double loop. Two of her spins merited Level 3 and she scored 22.44 points.

Skating to “Samson and Delilah” for her free, Hoey went for two jumps combinations and a double Axel out of her seven jumping passes. She closed out with a strong Level 3 change foot combination spin to wind up with a score of 43.32 for a total of 65.76.

Elizabeth Golding reclaimed her Advanced Novice Ladies title. In her short, she inserted a single Axel, a double Lutz-double toe combination and a double flip and was also awarded Level 2 for a layback spin. She posted a score of 20.25.

For her free routine to “Carmen”, Golding opened with a double flip and double Salchow. She also went for a double Axel in the course of her programme and finished up with a Level 3 flying camel spin. She scored 40.48 which gave her a total of 60.73.

The Basic Novice Ladies gold went to Sophia Tkacheva for the third year in a row. She scored 28.53 points. Grace Hegarty finished in second place with a score of 10.81.

The closest competition of the day was the National Gold Girls event. Aoibhe Hennigan emerged the winner scoring 17.36 points with Laura Hegarty taking silver just narrowly behind on 16.64.

Kevin Hegarty took the National Silver Boys title with a score of 11.29 for his free.