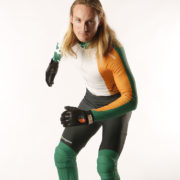 Just a week after his debut at the World Short Track Speed Skating Championships in Rotterdam, Netherlands, Ryan McAnuff was back racing along with his brother Sean McAnuff at the ST AmCup 3 in Midland, Michigan.

Sean also acquitted himself well with a highlight being a ninth place finish in Race 1 of the 500 metres. He earned a total score of 217.5 for 13th place overall.