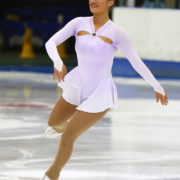 McAllister was the first in action in the Junior Men’s short programme. He attempted a triple Lutz combination and also cleanly landed a double Axel, as well as receiving a Level 4 for his change foot sit spin from the technical panel. He extended his own Irish junior record to 40.62 points which put him second place.

In the free skating, McAllister landed a triple Lutz at the start of his “Sherlock Holmes” routine and executed a double Axel and a triple Salchow in succession before attempting a second triple Lutz. He posted another new personal best of 76.17 and won the silver medal with a total of 116.79.

Following her fourth consecutive title at the Irish Figure Skating Championships last month, Hoey skated in the Junior Ladies short. Among the elements she attempted in her programme, there was a double flip-double toe loop combination and double loop. She was also awarded a Level 3 for her change foot combination spin. She scored 21.36 points which put her in 18th place after the short.

Skating to Nikolai Rimsky-Korsakov’s “Scheherazade”, Hoey included seven jumping passes in her free routine. She also performed a flying camel spin, a sit spin, a step sequence and rounded things off with another Level 3 change foot combination spin. She earned a score of 42.91 which saw her move up to 16th overall with a total of 64.27.