ISAI - Latest News
You are here: Home / Figure Skating / Top Eight Finishes For Stakelum And McAllister At Denkova-Staviski Cup
Warning: include(/home/iceskatingireland/www/wp-content/uploads/avia_fonts/fontello/charmap.php): failed to open stream: No such file or directory in /home/iceskatingireland/www/wp-content/themes/enfold/config-templatebuilder/avia-template-builder/php/font-manager.class.php on line 488 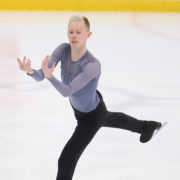 Conor Stakelum (25) and Sam McAllister (20) have concluded their campaigns earlier today at the Denkova-Staviski Cup in Sofia, Bulgaria with both placing in the top eight at the competition.

In the free skating, Stakelum included five triple jumps and had two spins graded Level 4. He recorded two more personal bests and Irish records for his free (114.36) and total (170.01) scores. He placed third in the free, but remained in fourth overall. McAllister tried four triple jumps in his free routine and was awarded Level 4 for change foot combination spin. He earned 97.60 for his free which left him in eighth place overall on a total of 149.27.

Full detailed results for the Denkova-Staviski Cup 2018 can be found here.