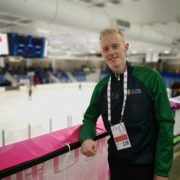 Conor Stakelum has been selected by the Ice Skating Association of Ireland (ISAI) to represent Ireland at the European Figure Skating Championships 2019 in Minsk, Belarus.

The five-time Irish senior champion will compete in the men’s singles category at the event alongside the cream of European skating talent in Minsk Arena during the championships which run from 21-27 January 2019. In order to qualify for the championships, each competitor had to obtain a set of minimum technical scores at International Skating Union (ISU) international competitions during the previous and/or current seasons.

This is the second consecutive year that the Dundee-based athlete will make an appearance at the European Championships. In January 2018, he became the first Irish male skater to participate in the prestigious championships which were first held in 1891.

“I am very pleased to have been selected to compete in my second European Championships and I look forward to once again representing Ireland in Belarus”, Stakelum said. “This season so far I have had the best scores and placements of my career internationally due to improved consistency thanks to hard work with the support and guidance of my coaches. I hope to carry this consistency into the European Championships and give strong performances that I can be proud of in Minsk.”