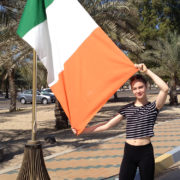 All three members of Ireland’s national figure skating team were in action this weekend at the FBMA Trophy in Abu Dhabi, United Arab Emirates.

Elizabeth Golding was the first to compete when she took to the ice for the Advanced Novice Ladies short programme. She included a single Axel, a double Lutz-double toe loop combination and a double loop in her routine to garner 26.61 points. This improved on her Irish national record and left her in second place midway through the competition.

Golding was the penultimate skater in the free skating and ended up posting the highest score of the day. She attempted a triple Salchow and two jump combinations, a double flip-double toe loop and a double Lutz-double toe loop. She posted a segment score of 46.15 and a total of 72.76 put her on the highest step of podium.

The Dubliner laid down a free programme that contained two triple Salchows, two triple toe loops, a triple loop and two Level 4 spins. He earned a score of 96.14 to give him a total of 145.05 and second place. This was his first international podium finish.

Sam McAllister attempted a triple Lutz, a triple flip and a double Axel in his short programme in the junior men’s category which also saw him being awarded a Level 4 for his change foot camel spin. A score of 45.35 saw him provisionally in second place.

The Ballymoney native went for two triple Lutzes, two triple Salchows and a triple flip in his free. He successfully landed two double Axels and received Level 4 for a flying sit spin from the technical panel. He was given a score of 72.09 for his free which gave him a total of 117.44 which put him in fourth place overall.