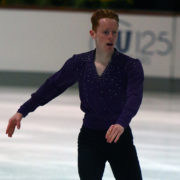 In January 2018, Conor Stakelum will become the first male skater to represent Ireland at the European Figure Skating Championships.

The four-time Irish senior champion will be one of 37 skaters from 29 countries competing in the men’s singles category at the event which takes place in Moscow, Russia from 15-21 January 2018. In order to qualify for the championships, each competitor had to obtain a set of minimum technical scores at International Skating Union (ISU) international competitions during the previous and/or current seasons.

The Dubliner is the second skater from Ireland to make an appearance at the European Championships. Clara Peters participated for the fourth time at the event in 2012 when it was held in Sheffield, United Kingdom.

“I am delighted to be representing Ireland at such a prestigious competition,” Stakelum said. “I am glad that all my hard work has paid off and would like to thank my coaches in Dundee and the Ice Skating Association of Ireland for their support.”

Stakelum will tune-up for the European Championships when he takes part at the FBMA Trophy in Abu Dhabi, United Arab Emirates next week.