You are here: Home / Triglav Trophy 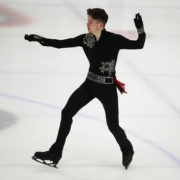 Sam McAllister (23) has capped off his international season with a silver medal and two new personal bests at the Triglav Trophy in Jesenice, Slovenia.

McAllister opened the senior men’s event yesterday in the short programme where he attempted a triple Lutz-triple toe loop combination and a triple flip right out of the gate. He landed a double Axel and his final two spins were graded Level 4 by the technical panel. He received a score of 56.23 points to place third halfway through the competition.

Earlier today he performed in the free skating and reeled off a triple Lutz-double toe loop combination, a triple Salchow, a triple flip and a triple Lutz in quick succession. He also included two double Axels and a triple toe loop in his routine with all three of his spins awarded Level 4. He racked up a free score of 120.72 points to give him a total of 176.95 points and moved up to second place overall. Both scores represent new Irish national records.

“It has been a successful trip to Slovenia,” McAllister said. “Still some hard work to be done, but I will enjoy what I have achieved here this weekend.”