You are here: Home / Skate Helena 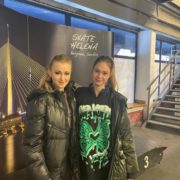 Elizabeth Golding has started 2022 with a 15th place finish in the Junior Women’s event at Skate Helena in Belgrade, Serbia.

Golding began the competition with the short programme. She attempted a triple toe loop-double toe loop combination, a double flip and a double Axel in her routine to “Hip Hip Chin Chin” by Club Des Belugas. She also performed a Level 4 change foot combination spin and received positive grade of execution for a Level 2 step sequence. She scored 31.73 points which put her in 18th place overnight.

The 2019 Irish Junior National champion was up again in the free skating the following day. Skating to “One Eye Open” by Lola Blanc, she opened with double flip-double toe loop combination and a triple Salchow attempts. Later on in the programme, she also went for a double Axel. Two of her spins were graded Level 4 and she earned a free score of 60.31 giving a total of 92.04 which moved her up to 15th place overall.

“I know I could have done a lot better,” Golding said. “My scores were low only because of some stupid mistakes I made, but it feels great to be back to competing after being injured. I loved every minute I spent on the ice.”