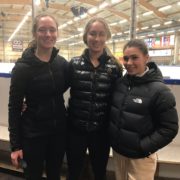 Foster was the first of the Irish skaters to perform in the short programme. She attempted a double Axel, a triple Salchow jump combination and landed a double flip in her routine to earn 33.56 points and placed 9th.

Dracy Condon made her international competition debut for Ireland at this event and she went for a double Axel, a solo double flip and a double Lutz-double toe loop combination. She also executed a Level 4 layback spin and received 23.05 points leaving her in 18th after the short.

Adare Condon was the final Irish skater to make an appearance in the short. She also tried a double Axel as well as a double Lutz combination and she landed a double flip. She closed out her short with a Level 4 change foot combination spin and was awarded 25.11 points which put her in 16th place.

The following day all three Irish skaters were on the ice again for the free skating. Dracy Condon was the first of the trio to skate and began with a double Axel attempt. She included six double jumps in her programme and achieved a Level 4 again for her layback spin. She scored 42.24 points for the free and with a total of 65.29 remained in 18th place.

Shortly afterwards, Adare Condon performed and she also opened her free by trying a double Axel and went on to attempt two double-double jump combinations. Both a sit spin and a change foot combination spin were graded Level 4 by the technical panel. She got 43.75 points in the free which gave her an overall score of 68.86 points and 17th place.

Foster was the last of the Irish skaters to take to the ice in the free. She also opted to start with a double Axel attempt and inserted two double-double jump combinations during her routine. A flying sit spin got her a Level 4 and she scored 48.58 points for her free which combined with short score made for a total of 82.14 points and 12th place.