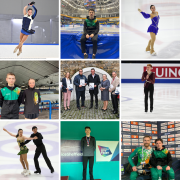 The year began dramatically when Conor Stakelum stepped in at the last moment to compete in Tallinn, Estonia at his fourth European Figure Championships in January. He placed 3oth which was his highest placement ever at the event.

In March, Elizabeth Golding became the first skater to represent Ireland at the European Youth Olympic Festival when the postponed edition in Vuokatti, Finland finally was held. She placed 26th.

Sean McAnuff and Liam O’Brien became the first skaters from Ireland to compete in the same category at an ISU World Championships when they raced at Short Track Speed Skating Worlds in Montreal, Canada in April. They finished 35th and 37th respectively. The same month Dillon Judge, Robyn Foster and Sophia Tkacheva all placed inside the top ten at the Kurbada Cup in Riga, Latvia, while Sam McAllister claimed a silver medal at the Triglav Trophy in Jesenice, Slovenia. Amidst all of that, the Irish Winter Sports National Governing Bodies, including the Ice Skating Association of Ireland, together with the Olympic Federation of Ireland launched the Irish Winter Sports Strategy.

The 2021/2022 season concluded with the Irish Figure Skating Championships held for the first time since 2020. The Dundee Ice Arena hosted the competition over two days with Laura Hegarty and Kevin Hegarty crowned the first ever champions in the Junior Ice Dance event. Sam McAllister and Dillon Judge both won third national titles in their respective categories, while Robyn Foster picked up her first national title.

In July, Conor Stakelum announced his retirement following a career where among other achievements he made history by becoming the first Irish male skater to participate at a European Figure Skating Championships. Among the 2022/2023 figure skating national team members selected were Laura Hegarty and Kevin Hegarty, another first for Irish ice dance.

Ireland fielded its largest ever team at an ISU Junior Grand Prix with Dillon Judge (Men), Robyn Foster (Women) and Laura Hegarty and Kevin Hegarty (Ice Dance) taking to the ice in Courchevel, France at the end of August. The Hegartys also became the first ever ice dance team to represent Ireland at an ISU event. The same weekend Sam McAllister took a bronze medal at the Britannia Figure Cup in Sheffield.

In October, Sam McAllister, Dillon Judge and Sophia Tkacheva were back at the Dundee Ice Arena for Tayside Trophy. Both Judge and Tkacheva posted a new set of season bests, while McAllister collected valuable ISU World Ranking points in coming fifth in his event.

Emerald Skate Learn To Skate lessons returned in November with courses held at Dundrum On Ice. Dillon Judge and Sophia Tkacheva rounded out 2022 by competing at the NRW Trophy in Dortmund, Germany. The ISAI Annual General Meeting was held virtually on 30 November and a new Board of Directors was elected.

The final month of 2022 began in spectacular style with an Ice Parade of Nations held at Dundrum On Ice to celebrate the inaugural World Ice Skating Day on 4 December. Liam O’Brien participated in back to back World Cups in Almaty, Kazakhstan setting a new national record in the 1000 metres and also becoming the first Irish short track speed skater to qualify for a World Cup semi-final.

2022 has been a landmark year for Irish ice skating with new heights achieved across a range of disciplines. The ISAI looks forward to making 2023 an even better year with the continued cooperation of all our stakeholders. 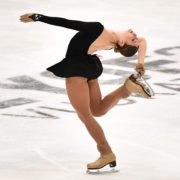 Elizabeth Golding has finished 26th in the Junior Women’s event at the European Youth Olympic Festival in Vuokatti, Finland. This was the first time an Irish ice skater has competed at an EYOF.

Golding took part in the short programme on the first day of the competition. She attempted a triple Salchow-double toe loop jump combination, a double flip and a double Axel. Two of her spins were rewarded with Level 4 by the technical panel. She scored a new season best of 32.41 points to place 26th overnight.

Golding was back on the ice earlier today for the free skating. In her routine, she attempted two triple Salchows one of which was in a sequence with a double Salchow as well as two jump combinations. She received a Level 4 for a flying camel spin and earned a free score of 61.50 points, another season best, giving her a combined total of 93.91 points.

“I’m definitely going to remember this competition for the rest of my life, because this is probably the peak of my career right now,” Golding said. As a junior to be able to participate in such a big competition, I’m really thankful to the Ice Skating Association of Ireland, and Karen (O’ Sullivan – President) and everyone who really believed in me and helped me get to this competition and chose me to represent Ireland at such a big multisport event.” 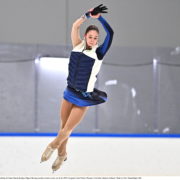 Elizabeth Golding makes history for Irish ice skating this week as she becomes the first Irish ice skater to compete at the European Youth Olympic Festival which takes place this year in Vuokatti, Finland.

Golding will line up against skaters from 31 other European countries. She will skate in the short programme tomorrow (23 March) where she has drawn starting position 18 in Warm-Up Group 4. She performs at 17:00 (Irish time).

The short programme result determines the timing at which Golding skates in the free skating which begins at 13:45 (Irish time) on Thursday (24 March).

“It’s so nice to know that you are the first person to ever do this,” Golding said. “I’m hoping to do everything cleanly and just go out and have fun.”

Golding’s progress at the European Youth Olympic Festival can be followed live on the official EYOF channel.

In a first for Irish ice skating, figure skater Elizabeth Golding has been selected by the Olympic Federation of Ireland to participate in the European Youth Olympic Festival in Vuokatti, Finland later this month (20-25 March). Golding will be one of just four athletes representing Ireland at the event which was originally scheduled to take place in February 2021, but was postponed twice due to the Covid-19 pandemic.

“It feels amazing to have been selected – dreams really do come true,” Golding said. “I am very excited to be representing Ireland on a brand new and even bigger international stage.”

Golding will be in action on 23 March (short programme) and 24 March (free skating).