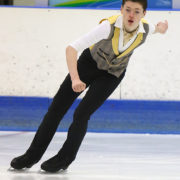 McAllister was participating this weekend at the ISU Junior Grand Prix of Figure Skating Riga Cup in Latvia. He got his campaign off to a start with his new short programme to “Nothing The Same” by Gary Moore. He included a triple Lutz jump and a triple flip jump combination attempts to score 37.03 points which put him in 25th place midway through the event.

Skating to the “Sherlock Holmes” film soundtrack, the Ballymoney born athlete took to the ice for his free skating programme with an upgraded technical arsenal compared to last season. He threw in two triple Lutzes, two double Axel jumps and a triple Salchow jump into his routine. A flying sit spin was also graded Level 4 by the technical panel. He earned massive new personal best free skating and total scores of 85.28 and 122.31 points respectively and moved up to 23rd overall. These are the highest marks ever achieved by an Irish skater at the junior level.

Crucially, this also meant that McAllister had obtained the required minimum technical free skating score (42.00) to be eligible to represent Ireland at the 2018 ISU World Junior Figure Skating Championships in Sofia, Bulgaria next March. He had already obtained the minimum for the short programme (20.00) last season.

“I am very happy,” McAllister said after the competition. “I tried to stay relaxed going into the free. My goal was to get the elements out and I was able to do that in the warm-up.

“When I was sitting waiting for my scores, I was praying. I knew it would be very close. I am going to spend the rest of this season improving my skating and jumps.”

The ISU World Junior Figure Skating Championships began in 1977 and have been held on an annual basis since then showcasing the best young figure skating talent. The last Irish skater to compete at the event was Viv Murphy in 2010.