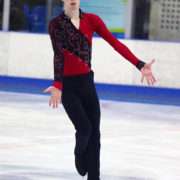 Conor Stakelum will be Ireland’s sole representative next month at the Nebelhorn Trophy 2017 (Oberstdorf, Germany) which will serve as the final qualifying competition for the 2018 Olympic Games in PyeongChang, Republic of Korea.

Stakelum will join athletes from 26 other nations who will be seeking to pick up one of the remaining six places available in the men’s singles event next February in South Korea. Twenty-four places were already allocated at the World Figure Skating Championships in March.

The four-time Irish senior champion and native Dubliner, who trains in Dundee, Scotland under the tutelage of Olympic coach Simon Briggs, will compete in Germany over the course of two days in short programme and free skating segments.