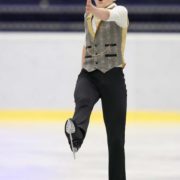 For the second week in a row, Sam McAllister took part in an international assignment. This time he was in Ljubljana, Slovenia for the Dragon Trophy 2017.

The Irish junior champion started out with his short programme where he attempted a triple Salchow-double toe loop combination, a triple loop and a double Axel. He scored 37.26 which put him in seventh place going into the free skating.

Skating to the “Sherlock Holmes” soundtrack, McAllister included two triple Salchows and two double Axel among other elements in his free routine. Two of his spins were also graded Level 4. He amassed a new personal best free score of 75.15 which gave him his highest total ever of 112.41 and lifted him up to fifth overall.