ISAI - Latest News
You are here: Home / News / McAnuffs At Second Stage of Olympic Qualification
Warning: include(/home/iceskatingireland/www/wp-content/uploads/avia_fonts/fontello/charmap.php): failed to open stream: No such file or directory in /home/iceskatingireland/www/wp-content/themes/enfold/config-templatebuilder/avia-template-builder/php/font-manager.class.php on line 488 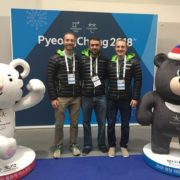 This week Irish short track speed skaters Ryan McAnuff (22) and Sean McAnuff take to the ice in Dordrecht, Netherlands for the second stop of the Audi International Skating Union (ISU) World Cup Short Track Speed Skating in the qualification process to secure berths for Ireland at the 2018 Olympic Winter Games in PyeongChang, Republic of Korea.

The McAnuffs kicked off their Olympic qualifying campaign last week in Budapest, Hungary. In the Netherlands, they will race against athletes from 40 countries over three disciplines – 500 metres, 1000 metres and 1500 metres. The subsequent two World Cup meets will be in Shanghai, China (9-12 November) and Seoul, Republic of Korea (16-19 November). Skaters will earn points for each distance they race at the four World Cups with their three best results counting towards their qualification ranking. The top ranked 32 skaters in the 500 and 1000 metres and 36 skaters in the 1500 metres will book their places in PyeongChang. A maximum total of 60 skaters across all distances will qualify for the Olympics.

“As we have been training in the Netherlands for the past few months, it’s going to be nice to race in a familiar atmosphere on such a big stage” Sean said.

“We are looking forward to building on what we did in Hungary last week and push ourselves up the rankings,” Ryan added.

You can follow the McAnuffs’ progress in the Netherlands via the Ice Skating Association of Ireland Facebook and Twitter accounts and, on 7 and 8 October, the ISU Skating Channel.

ISAI Board and Speed Committee Vacancies
Scroll to top