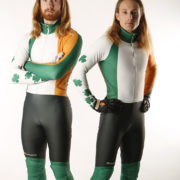 Ryan and Sean McAnuff will be flying the flag for Ireland at the International Skating Union (ISU) European Short Track Speed Skating Championships in Dordrecht, Netherlands this weekend (11-13 January).

For the first time ever at an ISU Championships, two skaters from Ireland will compete in the same category which is down to Sean McAnuff securing an extra spot with overall placement at last year’s Europeans in Dresden, Germany.

The brothers will be lining up with 76 skaters from 23 countries who will be vying for top honours in Dordrecht. The competition will begin with the qualifying rounds for the 500, 1000 and 1500 metre distances on Friday, 11 January. The subsequent rounds will take place on Saturday, 12 January and Sunday, 13 January.

This season has been an eventful one for the McAnuffs. Ryan began a degree in medicine at the University of Limerick in Autumn 2018 and has been balancing his studies with training. Sean has already participated in two World Cups and, in Calgary, Canada, he smashed the Irish national records in both the 500 and 1000 metres.

“I am excited to once again be representing Ireland at a major championships,” Ryan McAnuff said. “It is a wonderful feeling to be sharing this experience with Sean.”

“With two of us racing in Dordrecht, I really hope that we can build up the profile for short track back in Ireland,” Sean McAnuff said. “I am looking forward to racing with Ryan and all the other world class athletes this weekend.”

You can follow the European Short Track Speed Skating Championships on the ISU Skating Channel and by using the #EuroShortTrack #OneHandDown and #ShortTrackSkating hashtags on social media. Competition results will be updated here.