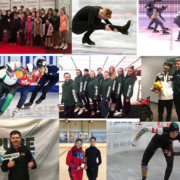 2018 got off to a bright start with Elizabeth Golding claiming gold in the Advanced Novice Ladies event at the FBMA Trophy (Abu Dhabi, UAE) in January. Conor Stakelum took home Senior Men’s silver at the same event. Later on in the month, Stakelum also became the first male skater from Ireland to compete at a European Figure Skating Championships when he took to the ice in Moscow Russia. He finished in 36th place. Sean McAnuff made his debut at the European Short Track Speed Skating Championships in Dresden, Germany where he finished 28th overall and thus secured two spots for Ireland in the 2019 championships.

The 2018/2019 season got off to a magnificent start in August when Elizabeth Golding set a new set of Irish Junior records at the Junior Grand Prix in Linz, Austria. At the age of 13, Golding also became the youngest Irish skater to ever participate in the series.

Sean McAnuff broke both the 500 metres and 1000 metres senior Irish records at the ISU World Cup Short Track Speed Skating in Calgary, Canada in November. Tara Donoghue smashed her Irish 3000 metres record at the ISU Junior World Cup Speed Skating in Tomaszów Mazowiecki, Poland by eight seconds to also qualify herself for that distance at the Junior World Cup Final and World Junior Speed Skating Championships in February 2019. Conor Stakelum posted a new set of Irish senior records on his way to a fourth place at the Denkova-Staviski Cup in Sofia, Bulgaria.

Thanks to everyone who supported Irish ice skating in 2018!