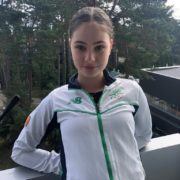 Golding began with the short programme. Skating to “Masquerade Waltz” by Aram Khachaturian, she attempted a double Axel, a triple Salchow combination and a double loop. She earned 22.72 points to put her in 36th place halfway through the event.

The following day the Irish junior champion returned to the ice to perform in the free skating. She went for two double Axels and a triple Salchow at the opening of her routine to a selection of music by Two Steps From Hell. She also achieved a Level 4 for her layback spin later on in her programme. She placed 34th in the free with a score of 48.74 which gave her a total of 71.46 and 35th overall.

McAllister and Stakelum Take On Nebelhorn Trophy
Scroll to top