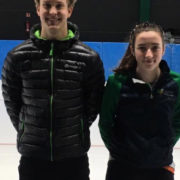 The Irish skater proceeded to the 3000 metres where she demolished her previous Irish record of 4:46.37 by almost eight seconds. Her clocking of 4:38.55 put her in 15th place for the distance and also earned her the qualifying time for the Junior World Cup Final in February 2019.

Donoghue was back on the ice for the 500 metres earlier today where she put in another solid showing. Her time of 43.46 was only 0.09 seconds outside her personal best and gave her a ranking of 33rd. She made the qualifying time for the 1500 metres in Germany last month.

Her final event of the competition was the Mass Start and she finished 16th overall in a time of 6:10.96.

Detailed results for the competition can be found here.

McAllister And Stakelum Ready For Denkova-Staviski Cup
Scroll to top