ISAI - Latest News
You are here: Home / News / Tara Donoghue Lines Up For World Junior Championship Debut
Warning: include(/home/iceskatingireland/www/wp-content/uploads/avia_fonts/fontello/charmap.php): failed to open stream: No such file or directory in /home/iceskatingireland/www/wp-content/themes/enfold/config-templatebuilder/avia-template-builder/php/font-manager.class.php on line 488 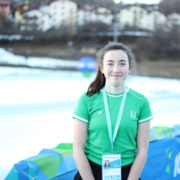 This is the second season that Donoghue has competed internationally for Ireland. She attained the qualifying times for two distances for these World Junior Championships in autumn 2018. She will race in the 1500 metres tomorrow afternoon (Friday 15 December) and in the 3000 metres the following afternoon (Saturday 16 December) in a field of athletes from 19 countries.

“I am really excited to be have qualified for World Juniors and it is an honour to be the first Irish skater to do so,” Donoghue said. “I am looking forward to doing the best that I can over the two distances in Italy.”

You can watch Donoghue race live on the ISU’s YouTube channel and also follow her progress via the #WorldJSpeed and #SpeedSkating hashtags on social media.