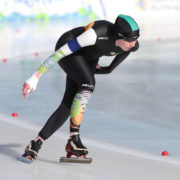 Tara Donoghue participated this weekend in her final competition of the season at the Viking Race 2019 in Heerenveen, Netherlands.

The second day started with Donoghue taking more than a second off her 1000 metres personal best and national record by posting a time of 1:24.29 which put her in 10th for the distance. She also lined up for the 3000 metres, but unfortunately fell mid-race and was unable to finish. Nevertheless, two new Irish records can only be viewed as a hugely positive way to conclude a very successful season overall.