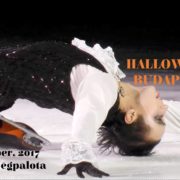 Stakelum was the first to take to the ice in the short programme on the first day of competition. The Dubliner included a triple loop, triple toe loop-triple toe loop combination and double Axel in his “Clair de Lune” routine and also executed three Level 4 spins. He received 51.80 points to put himself in sixth place.

McAllister was the final skater to compete in the short. Skating to “Take Five” by the Dave Brubeck Quartet, the Ballymoney, County Antrim native opted for a triple Lutz, triple flip-double toe loop combination and a double Axel for his jumps. He was also awarded a Level 4 for his flying sit spin and accrued 52.17 points to slot himself in fifth place midway through the competition.

In the free skating, Stakelum performed to “The Show Must Go On” and rotated five triple jumps as well as two double Axels. His change foot combination spin was also graded Level 4. He scored 100.85 points for his free to accumulate a total of 152.65. This left him in sixth place at the conclusion of the event.

McAllister skated in the final group for the free to “The Young Lady and the Hooligan”. He attempted three triple jumps and two double Axels. The technical panel deemed his change foot combination spin to be Level 4. A free score of 94.30 points gave him a total of 146.47 points and eighth place.

In only her second competition since moving up to the junior ranks, Elizabeth Golding finished in 14th place in both segments of her event. She scored a total of 85.00 points for 14th overall.

You can view the full and detailed results for the Halloween Cup here.