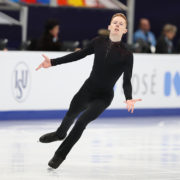 Stakelum was the second competitor of the event to take to the ice for his short programme which he skated to “The Red Violin” by John Corigliano. He began positively with a triple toe loop/triple toe loop jump combination that was evaluated positively by the judging panel. However, he then only made a single rotation on his planned triple loop jump and received no score for the element. He recovered with a double Axel jump and continued with a Level 3 flying sit spin. Unfortunately, he went off balance on a change foot camel spin and the element did not count. His step sequence was graded Level 2 by the technical panel and he was awarded Level 4 for his closing change foot combination spin.

The Dubliner scored 43.07 points and, as he did not finish in the Top 24 in the short programme, was not able to advance to Friday’s free skating.

“I am disappointed that I was not able to skate my best today,” Stakelum said. “On the other hand, I am extremely honoured to have represented Ireland on such a big stage and I am going to work even harder to perform better next time.”

Stakelum was the first male skater from Ireland to participate in an ISU European Figure Skating Championships.