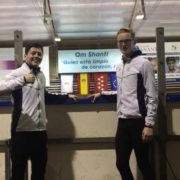 Conor Stakelum (25) and Sam McAllister (19) competed in the Autumn Classic International in Oakville, Canada where they finished 11th and 17th respectively.

In the short programme, Stakelum included a triple loop, a triple toe loop-triple toe loop combination in his routine to “Clair de lune” by Claude Debussy. He also had all three of his spins graded Level 4 and he earned 54.71, a new International Skating Union (ISU) personal best, to position himself in 10th midway through the event.

McAllister skated his short to “Take Five” by the Dave Brubeck Quartet. He attempted a triple Lutz-double toe loop combination, a triple flip and a double Axel in his programme. Two of his spins received Level 4 from the technical panel. His score of 47.89 was also a new ISU PB and it put him in 13th going into the free skating.

McAllister performed his free to “The Young Lady and the Hooligan” and attempted a triple Lutz on its own and in sequence, as well as a triple flip and a double Axel. He received a Level 3 and positive grade of execution for his flying sit spin. He scored 78.42 for his free which gave him a total of 126.31. The latter mark was a new ISU PB and meant he finished 17th overall.