McAnuff concluded last season with a 38th place at the World Championships debut in Sofia, Bulgaria. This season he will be aiming to build on this performance and move up the global standings.

“I am looking forward to this coming season,” he said. “I am excited to begin racing this weekend in Salt Lake CitySe.”

The weekend’s event in Salt Lake City will be the first of six World Cup events across three continents. McAnuff will compete in two individual distances – the 500 metres and the 1000 metres. 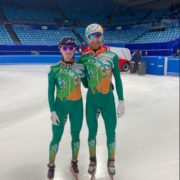