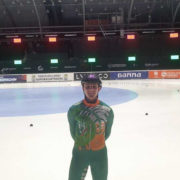 Liam O’Brien (22) is back flying the flag for Ireland this weekend as he makes his debut at the World Short Track Speed Skating Championships in Dordrecht, The Netherlands (5-7 March).

The championships are being held in accordance with the Guidelines for International Skating Union (ISU) Events during the COVID-19 Pandemic with comprehensive testing, hygiene and social distancing protocols in place.

O’Brien will be among over 115 athletes from 29 countries participating in the annual event. He will first race on Friday (5 March) in the qualifying rounds for the 500, 1000 and 1500 metre distances with further rounds taking place over the following two days.

“I am excited to get out there and race again this weekend,” O’Brien said. “The Dutch federation and the ISU have done a great job at organising the event and keeping the athletes and staff safe during difficult times. It will be a strong competitive field and the racing should be entertaining!”