ISAI - Latest News
You are here: Home / News / National Team Bag Title And Records At Denkova-Staviski Cup
Warning: include(/home/iceskatingireland/www/wp-content/uploads/avia_fonts/fontello/charmap.php): failed to open stream: No such file or directory in /home/iceskatingireland/www/wp-content/themes/enfold/config-templatebuilder/avia-template-builder/php/font-manager.class.php on line 488 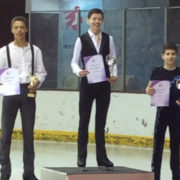 The three members of the national figure skating team competed at the Denkova-Staviski Cup in Sofia, Bulgaria and all of them set new benchmarks for Irish skating in the process.

Sam McAllister set the tone on the first day of competition by setting a new Irish record of 54.29 in the Junior Men’s Short Programme. In his routine to “Nothing The Same” by Gary Moore, he landed a triple Lutz, triple Salchow-double toe loop combination and a double Axel to stand in first place midway through the competition.

In the free skating, McAllister put on another fine display in a programme to the “Sherlock Holmes” film soundtrack that contained two triple Lutzes, two triple Salchows and a triple flip. He earned another Irish record of 104.40 to finish first overall with a total of 158.69 points.

“This was a tough competition, but I fought hard and did my best and thankfully it paid off,” McAllister, who turns 19 this weekend, said after winning the title. ” I would like to thank my mum and my incredible coach, Margaret O’Neill. I would also like to thank the Ice Skating Association of Ireland for their continued support.”

Conor Stakelum participated in the Senior Men’s event. In the short programme, he included a triple toe loop-triple toe loop combination, a triple loop and a double Axel in his “Red Violin” routine. He also had two spins graded Level 4. A score of 49.44 put him in 11th place going into the free skating.

The four-time Irish champion skated a superb performance in the free to “Chasing Cars” by Snow Patrol. He executed two triple Salchows, two triple toe loops and a triple loop in his routine to post an Irish record score of 105.72 which was good enough for fifth place in the segment. His combined total was 155.16 which left him in 10th place overall.

“I am pleased with how my free went at this competition,” Stakelum said. “It is a clear sign that all that I am working on in training is paying off.”

Elizabeth Golding was the final and youngest national team member to take to the ice in Bulgaria when she competed in the Advanced Novice Girls category. The two-time Irish champion set a new Irish record in the short programme with a score of 26.59 which had her in 12th at the halfway point.

Golding racked up another Irish record in the free skating where she scored 53.11 to move up to 10th overall with a total of 79.70.