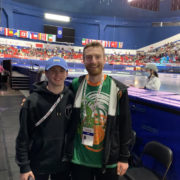 Sean McAnuff (24) and Liam O’Brien (23) have concluded their seasons at the World Short Track Speed Skating Championships in Montreal, Canada where they finish 35th and 37th respectively in the overall classification. This was the first time Ireland fielded two skaters in the same category at an ISU World Championships.

Racing began for the two Irish men with the opening day qualifying rounds. First up were the 1500 metres quarterfinals. O’Brien came fourth in Heat 4 in a time of 2:22.931. while McAnuff was fifth with a time of 2:24.441 in Heat 6.

The final distance on the opening day were the 1000 metres preliminaries. Unfortunately, O’Brien picked up a penalty in Heat 5. McAnuff wound up fourth in Heat 8 (1:27.595).

The Irish skaters lined up for two ranking finals on Day Two. McAnuff appeared in Heat 2 of the 1500 metres and finished sixth in a closely fought race in 2:26.229. O’Brien was next on the track in Heat 3 and took fourth in 2:29.668. O’Brien finished 25th and McAnuff 34th overall in the distance.

For the 500 metres preliminaries ranking finals, McAnuff and O’Brien were both drawn in Heat 2. Although O’Brien received a penalty, McAnuff had his best finish of the championships by placing second in a time of 43.243. McAnuff ranked 35th and O’Brien 37th for the distance.

The last day of the championships saw just McAnuff in action in the 1000 metres preliminaries ranking finals. He came third in Heat 3 with a time of 1:32.192 and was classified 31st for the distance. O’Brien ranked 44th.

“I think this has been the most successful weekend of my skating career thus far,” McAnuff said. “I was able to accomplish each goal I set, as well as reconnect and enjoy the company of fellow skaters that I have met over the years. It was refreshing, yet inspiring to finish off this Olympic season back in Canada at Maurice Richard. I’m thankful for the opportunity to have raced this weekend, but I am certainly looking forward to the season of rest ahead!”

“The competition didn’t go as planned after receiving penalties in both the 500 and 1000 metres,” O’Brien said. “However, it was great to have crowds back at racing and have an atmosphere in the ice rink. I’m glad that this season has come to an end as it was full of ups and downs and time for some much needed rest.” 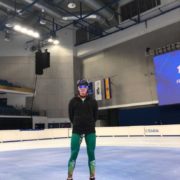 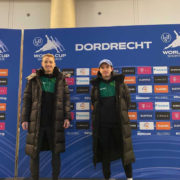 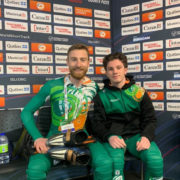