Elizabeth Golding and Sophia Tkacheva finished 11th and 12th respectively earlier today at the Budapest Trophy, their opening event of this season, in Budapest, Hungary.

In the short programme, Golding attempted a double Axel, a triple Salchow combination and a double Lutz. All three of her spins were graded Level 3 and she scored 28.55 for the segment to put herself in 11th place overnight after the first day of competition.

The following day Golding began her free skating with double Axel and triple Salchow attempts and went on to land a second double Axel as well as execute a Level 4 Flying Camel Spin towards the end of her programme. She received a free skating score of 56.66 points to give her a combined total of 85.21.

“The competition went okay,” Golding said. “I have many things to work on, but it was great to be back competing after such a long break.”

Tkacheva drew first to skate her short in which she attempted a double Axel, a double flip-double loop combination and a double Lutz. Her Change Foot Combination Spin and Step Sequence were both graded Level 2 by the technical panel and she was awarded a score of 27.30 points putting her in 12th place midway through the event.

In the free, she commenced with a double flip-double loop combination and a double Lutz before attempting a double Axel. She closed her routine with a Level 4 Change Foot Combination Spin and earned a free score of 48.91 points which gave her a final total of 76.21.

“I had a great experience participating here in Budapest,” Tkacheva said. “It has always been my dream to compete at an ISU international competition. I really hope things will go back to normal or improve with the coronavirus soon and I will have regular access to ice to work on my programmes and improve the consistency of my jumps.” 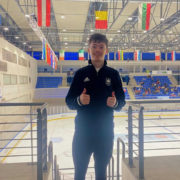