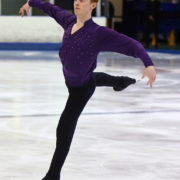 This week Conor Stakelum (24) will be Ireland’s sole representative at the Nebelhorn Trophy 2017 (Oberstdorf, Germany) which serves as the final qualifying competition in figure skating for the 2018 Olympic Games in PyeongChang, Republic of Korea.

Stakelum joins athletes from 24 other nations who will be seeking to pick up one of the remaining six places available in the men’s singles event next February in South Korea. Twenty-four places were already allocated at the World Figure Skating Championships in March of this year.
The four-time Irish senior champion and native Dubliner, who trains in Dundee, Scotland under the tutelage of Olympic coach Simon Briggs, will compete in Germany over the course of two days in short programme and free skating segments.
The Nebelhorn Trophy begins on 27 September and runs until 30 September with an official practice day at the start and then three days of competition. Stakelum will compete initially on the evening of Thursday 28 September and again on the evening of Friday 29 September.
“As this will be my first event of the season, I am really excited to get on the ice again and skate in front of an audience,” Stakelum said. “There are lots of really talented skaters competing in my category, so I am just going to go out here, do my best and see what happens.”
You can follow Stakelum’s exploits in Germany via live stream (link below) and the Ice Skating Association of Ireland’s Facebook and Twitter accounts.
Conor Stakelum National Team Bio
Conor Stakelum International Skating Union Bio
Nebelhorn Trophy Live Stream
https://isai.ie/wp-content/uploads/2018/10/Conor-Stakelum-Aims-For-Olympic-Berth.jpg 1000 750 Sportlomo https://isai.ie/wp-content/uploads/2018/10/ISAI-Logo.png Sportlomo2017-09-26 10:30:542018-10-24 10:33:18Conor Stakelum Aims For Olympic Berth
2017-2018 Test Scores