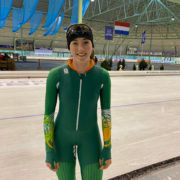 Donoghue will race in the 500, 1000, 1500 and 3000 metres distances, as well as the mass start event, over the course of the two days. Starting times for her events are as follows (all Irish time):

The ISU Junior World Cup will be streamed live on the KNSB YouTube Channel. Results can be found on the ISU Speed Skating Results page and you can also follow the event on social media via the #SpeedSkating hashtag.

McAnuff began the competition with the heats of the 1000 metres (1) where he was drawn in Heat 4. He recorded a time of 1:30.831 to place fifth. The following day in the repechage quarterfinals he was penalised and was classified 46th overall for the distance.

McAnuff also contested the 500 metres in Montreal. For the heats, he lined up in Heat 2 and posted a time of 42.804 for fourth place. In the repechage quarterfinals, he came third in Heat 3 in a time of 42.779. He was 35th in the overall classification for the distance.

For the second week in a row, Sean McAnuff will compete at an International Skating Union (ISU) World Cup Short Track Speed Skating event this weekend (8-10 November) when he races at the Maurice-Richard Arena in Montreal, Canada.

The Irish short track speed skater is coming off the back of racing in Salt Lake City, United States of America last week in what was his season opener. He will step on to the ice for the preliminary rounds on Friday 8 November with racing opportunities also over the course of the following two days.

McAnuff started the competition with the heats of the 500 metres where he lined up in Heat 1. He finished fourth in a time of 42.826, just over half a second off his personal best. In the repechage quarterfinals, he also came fourth in Heat 4 while bringing his time down once again to 42.658. Overall, he finished 40th for the distance.

McAnuff also participated in the 1000 metres heats where he was drawn in Heat 4. Half way through the race, contact was made between him and another skater on a corner and he was subsequently disqualified. Unfortunately, this also meant he could not skate in the repechage.

McAnuff concluded last season with a 38th place at the World Championships debut in Sofia, Bulgaria. This season he will be aiming to build on this performance and move up the global standings.

“I am looking forward to this coming season,” he said. “I am excited to begin racing this weekend in Salt Lake CitySe.”

The weekend’s event in Salt Lake City will be the first of six World Cup events across three continents. McAnuff will compete in two individual distances – the 500 metres and the 1000 metres. 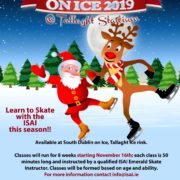 The Ice Skating Association of Ireland (ISAI) is pleased to announce Learn to Skate classes will be available at South Dublin on Ice, Tallaght for the 2019/2020 season.

Classes will run for eight weeks starting 16 November. Each class is 50 minutes long and taught by a qualified ISAI Emerald Skate Instructor. Participants will be placed in classes based on age and ability. Contact info@isai.ie for further information. 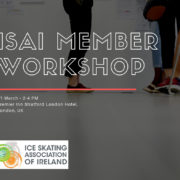 A two hour members workshop will be held from 14.00hrs at the Premier Inn London Stratford Hotel, London on Sunday, 31 March. The workshop will cover membership of the Ice Skating Association of Ireland, rules and regulations, competitions and national team selection. Please contact info@isai.ie for further details. 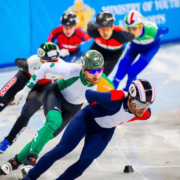 On the first of three days of racing, McAnuff participated in the qualifying rounds. In the 1500 metres quarterfinals, he lined up in Heat 4 and came home in fifth in a time of  2:23.770. Next up were the 500 metres preliminaries where he finished third in Heat 5 with a time of 43.333 and advanced to the heats. He posted a quicker time of 43.277 in Heat 2 to end up in fifth. The 1000 metres preliminaries ended up being his final race of the opening day and he placed fourth in Heat 1 in a time of 1:31:968.

There were two ranking finals for McAnuff on the second day of competition inside the Arena Armeec. In Heat 3 of the 1500 metres, he crossed the line in first place in a time of 2:37.283. He backed that result up by coming second in Heat 6 of the 500 metres where he clocked 43.440.

The final race of McAnuff’s maiden World Championships appearance was the 1000 metres ranking final on the last day of competition. He placed fourth in Heat 4 with a time of 1:32.266. This gave him an overall classification of 38th for the event.

“I had a great weekend of racing against the best in the world,” McAnuff. “I am looking forward to next season already and will be working hard in preparation over the coming months.”