The selection of the Irish Figure Skating National Team for the 2019-2020 season has been made by the Board of Directors of the Ice Skating Association of Ireland (ISAI).

Sam McAllister won his first Senior National title in April this year in his first full season as a senior competitor. From Ballymoney, Northern Ireland, he is coached by Margaret O’Neill in Nottingham and Sheffield, England.

Conor Stakelum is a five-time Senior National champion. A native of Dublin, he trains in Dundee, Scotland with Simon and Debi Briggs. He finished 33rd at this year’s European Figure Skating Championships in Minsk, Belarus.

Elizabeth Golding picked up her first Junior Ladies title at the Irish Figure Skating Championships in April. She is coached in Moscow, Russia by Alexandra Chistiakova.

Sophia Tkacheva has been selected for the first time as a member of the Irish National Team. From Gorey, County Wexford, this year she claimed Irish Championships silver at Advanced Novice level. 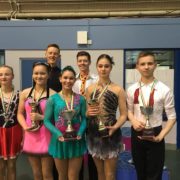