You are here: Home / Sam McAllister 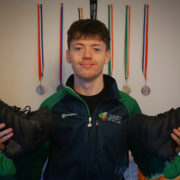 On 10 December 2020, two-time Irish senior champion Sam McAllister received word he had been chosen to represent Ireland at the 2021 European Figure Skating Championships. However, later that same day the International Skating Union (ISU) announced the competition had been cancelled due to the worsening situation surrounding the COVID-19 pandemic. In the week when he should have been making his Europeans debut, the Ice Skating Association of Ireland (ISAI) talked briefly with McAllister about how he has kept his motivation despite all the setbacks he has faced this season. END_OF_DOCUMENT_TOKEN_TO_BE_REPLACED 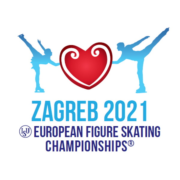 The Board of Directors of the Ice Skating Association of Ireland (ISAI) have selected eight figure skaters to the ISAI National Team for the 2020/2021 season.

Sam McAllister retained his Senior National title in February this year. From Ballymoney, Northern Ireland, he is coached by Margaret O’Neill in Nottingham and Sheffield, England. This will be his fifth season as a National Team member.

Conor Stakelum is a five-time Senior National champion. A native of Dublin, he trains in Dundee, Scotland with Simon and Debi Briggs. He finished 34th at this year’s European Figure Skating Championships in Graz, Austria.

Adare Condon placed fourth in the Junior Ladies event at the 2020 Irish Figure Skating Championships. She trains under Megan Doyle and Tracy Doyle in Elmsford, New York. This is her first season as a member of the Irish National team.

Dracy Condon is the Junior Ladies bronze medallist at the 2020 Irish Figure Skating Championships. She practices alongside her sister in New York City and is also a debut member of the Irish National team.

Robyn Foster competed at the 2020 Irish Figure Skating Championships in February for the first time, but had to withdraw due to injury after the short programme. She trains in Coventry, England under Marina Serova and this will be her first season skating for Ireland.

Elizabeth Golding finished second in the Junior Ladies event at the 2020 Irish Figure Skating Championships. She divides her training time between Dubai, United Arab Emirates and Moscow, Russia. In 2019, she represented Ireland at ISU Junior Grand Prix events in Latvia and Italy.

Sophia Tkacheva is the 2020 Irish Figure Skating Championships Junior Ladies champion. From Gorey, County Wexford, she trains on ice in Northern Ireland and Minsk, Belarus. This is her second season on the ISAI National Team.

You can learn more about our national team members here.

Sam McAllister (21) competed this weekend at the Bosphorus Cup in Istanbul, Turkey where he represented Ireland in the Senior Men’s event.

The Irish senior champion began with the short programme on Friday, 29 November. Skating to “Take Five” by Dave Brubeck, he attempted a triple Lutz combination and landed a double Axel. He garnered a Level 4 for his closing change foot combination spin and scored 43.33 points which put him in 11th place.

McAllister was back on the ice on Saturday, 30 November for the free skating. In his “Pirates of the Caribbean” routine, he included four triple jumps and received Level 4 for a change foot combination spin. He was awarded a free score of 95.14 giving him a total of 138.47 and 9th place overall.

Full results for the Bosphorus Cup can be found here.

Irish figure skater Sam McAllister will be competing this weekend at the Bosphorus Cup (29-30 November) in Istanbul, Turkey.

The Irish senior champion will be on the ice tomorrow (Friday, 29 November) for his short programme with the competition beginning at 11:40hrs Irish time.  The following day he will return to compete in the free skating which starts at 10:00hrs.

The event will be streamed live online on YouTube and further information is available on the competition results page.